A Woman in Boy Scouts

Scouting is a great way to enjoy nature. It is an active program that allows boys to grow into men. Boy Scouts in days of old didn’t allow women leaders, but women could be Cub Scout leaders. This is still true in some areas.  Being a mother of a scout, I have been active since my son was a Cub.  I helped him transition from a Cub to a Boy Scout.  I became a Webelos leader.  Webelos stand for “We Be Loyal Scouts”.  As a Webelos’ leader, I helped the boys prepare for their new found roles in scouting.  As a Cub Scout, the boys are still under their parents’ supervision. This is a parent driven organization at this stage.  As the boys graduate from Webelos, they transition to a full-fledged Boy Scout.

As a Webelos leader, I trained and took a “youth protection” exam.  During my tenure, I taught my Cubs about retiring the American flag, how to fold the flag, and how to salute.  There are other activities you learn to teach as well.  One of the most important things that a Cub Scout must know and learn is the oath.  Leaders take time to teach the oath and the boys say it at every meeting.  Repetition has been the easiest way to teach a scout.  For additional training, I went to “Scout University.”

At Scout University, you get hands-on training on various subjects that the scouts will encounter during their membership.  They teach you how to fold a tent, what to carry on a campout, how to read a map and a compass, how to make camping meals such as “hobo meals,” and leadership training.  At the university, you get a chance to meet and greet fellow leaders from your district.  It is a great opportunity to ask for ways to improve your skills and a great way to spend a Saturday. 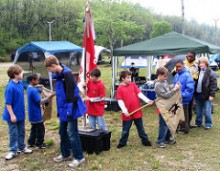 After my son left Cub Scouts and joined the Boy Scouts, I retired as a leader. He was very active. I didn’t continue because I knew this was a male-dominated leadership step for my son.  At the time, I didn’t know any women leaders.  From my research, I found that at this stage in the boys’ life, men took an active role in their training.  This was also true for the troop my son joined.  In Boy Scouts, the boys lead the meetings and activities which is opposite of Cub Scouts.  In Boy Scouts, parents are observers or transportation.  As parents, we join the Troop Committee.  This committee gets together once a month to discuss the progress of the boys and fundraising activities.

One day I was asked to accompany my son on one of his summer camp trips because the troop was short leaders. I saw women leaders at the summer camp.  I was amazed.  I had not known that women could participant in Boy Scouts in that capacity.  At that summer camp, I wore my Cub Scout uniform since I was not a scout leader.  It was a different experience for me to be around teenagers.  It was an enlightening experience.  I was used to working with youngsters and now I had to learn how teenage boys did things.

After seeing the women at summer camp, I had a different outlook on scouting.  I saw that there were opportunities for women.  I, however, didn’t become a leader right away, but I served in that capacity when needed.  After several years, I decided to become a leader and be the “Activities Coordinator.”  In this job, I keep records of the boys’ activities and leadership advancements. I enjoy this position because I get a chance to use my computer and it gives me the opportunity to have an active role in my son’s years as a Boy Scout.  When it is time for summer camp, I now go as a leader.

Summer camp is an opportunity for the boys to spend a week learning new skills.  The skills they learn earn them merit badges. Each merit badge is a step in achieving the ultimate goal of a Boy Scout, Eagle.  Eagle is the highest honor a scout can achieve.  It is awesome to see all the men who have Eagle when I attend summer camp.

Camping is the major activity performed by Cub and Boy Scouts.  This activities requires that you be outdoors.  I grew up as a person who didn’t go outdoors except to play sports such as baseball, football, and basketball.  I never imaged going outside to camp.  I grew up in a small country town surrounded by woods.  It would have been very easy to camp out.  I learned about camping after I married an outdoor enthusiast.  My husband likes hunting and fishing activities as well as walking in the woods to enjoy nature.

I never paid much attention to nature.  I was surrounded by it, but never took the time to really enjoy what it had to offer.  Since being in scouts, I have learned how to fold a tent, how to cook outdoors in Dutch ovens and cardboard ovens, how to fold a flag, how to retire the American flag, and many other outdoor activities.  I also have the opportunity to shower outdoors if I so desire.  It is an awesome experience to shower without a ceiling.  These are some of the outdoor experiences you get from scouting.  Being involved in scouting allows me to spend extra time with my son who really enjoys the scouting experience. I believe that every woman should take the opportunity to become a scout leader.  I started in Cub Scouts, and I will finish in Boy Scouts.

Scouting is a great way to enjoy nature.