Summer, the Season of Birch Bark

Paper birch and related white barked birches occur at northern latitudes around the world. Where ever they occur the bark is used in one way or another. Although there are similarities in the types of objects made from birch bark from these various regions of the world, it is possible to identify some unique features from each region. For example, in North America, sheets of bark of various sizes are used to make containers of different kinds, including the birch bark canoe. The bark is cut followed by sewing with spruce root, basswood bark, cedar bark and other natural and manufactured materials to allow shaping or if larger pieces are needed they may be sown together with one of the materials mentioned above. The Ojibway people often decorated small containers with porcupine quills. Northern Europeans (Scandinavia and Russia) commonly cut the sheets of bark into strips and wove the strips into a variety of items—for example back packs, shoes and baskets. They also used small sheets of bark to make canisters for food storage. Russian work commonly seen today in gift shops in the U.S. are highly decorated with figures made by stamping, cutting or appliqué techniques. 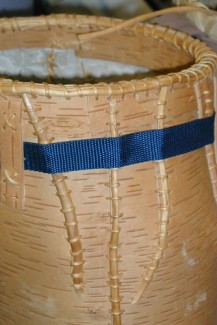 1.    Always have the permission of the landowner to harvest bark.

2.    Harvest bark from trees that are planned to be cut in the near future – this is not always possible.

4.    The best time of the year to harvest bark usually falls sometime between mid-June and early July. Each tree will vary somewhat. If you are not sure if a tree is ready, one can make a small test cut at the base of the tree. Bark harvested before or after this prime period is sometimes referred to as winter bark – it has a different color than the summer bark.

5.    Once the bark is off the tree it should be rolled length-wise or at right angles to the way it was on the tree. The bark has the tendency to "want to" roll up in the same way that it was on the tree. It is difficult to unroll if it does that, particularly once it has dried. The bark can either be stored rolled up or flat with some weight on top to keep it from curling, especially at the edges. Bark quality varies greatly from tree to tree.

6.    Bark can be collected from dead and down trees. This bark tends to be somewhat more fragile than bark from living trees, but it is very useful for some things. 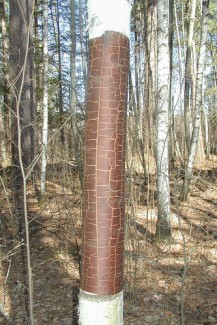 Always know who owns the land from which you want to harvest bark – and respect the wishes and requirements of the landowner. There is no uniform set of regulations regarding harvesting at the present time and so it is very important to know where you want to harvest and obtain proper permits.  Avoid indiscriminate harvesting.

Pictures are from Flickr by Eli Sagor, Forestry Extension Educator, U of MN.

This article was provided and authored by Julie Miedtke Local Extension Forestry Educator in Itasca Co. Minnesota. She is also an expert on non-timber forest products and a leader of the MN Women's Woodland Network. Thank you Julie for sharing your passion and expertise!

3/12/21
EmpowerU - Empowering Woodland Owners (and others)

2/9/21
Family woods work during the pandemic

7/1/19
Managing ash woodlands in the face of emerald ash borer: what are your options?

3/20/19
By Land and By Sea, new invasive species field guide

7/10/17
Forest recovery: a story of dedication, engagement and regeneration

5/15/17
How to Prioritize Invasive Species Management

5/2/16
Garlic Mustard Management: Making the World Better One Cup of Soup at a Time

1/7/14
Will Winter Cold Save us from Emerald Ash Borer?