A Review by Leigh Macmillen Hayes, writer and author of the blog wondermyway.com

I love it when people recommend books to me and even more when I discover the the recommendation is spot on. Thus was the case when at the Maine Master Naturalist Board Retreat last month, Beth Longcope suggested Identifying Ferns the Easy Way by Lynn Levine. She’s also the creator of Mammal Tracks and Scat, a life-size tracking guide that I don’t use as often as David Brown’s Trackards. And she has authored several other books. But it’s this newly-released little guide that will find its way into my pack on a regular basis this spring and summer. Within the 74 pages of the 4.5 x 6.5-inch book are simplified explanations with illustrations.

Levine begins with general information about how to use the guide, general tips, and how to observe ferns. Under general tips, I especially appreciated the second: “Ferns that usually grow in clusters will sometimes grow alone.” The key “read-between-the-lines” takeaway is that if we just go by what most books say or people tell us, we’ll become totally confused when we meet an oddball choosing to strike out on its own. Not all ferns have read the books. And that goes for any and all species. It’s best to familiarize ourselves with the various species so that when one does behave in a different manner, we recognize it for what it is.

I also appreciate tip #4, but you’ll have to purchase the book to understand why.

Being thorough with her topic in such a short space, she includes information about the ancient history of ferns bringing them from past to present structures. Their unique reproductive system is also discussed with the life cycle illustrated by Briony Morrow-Cribbs.

And then, the nitty gritty part of the book. First, she shows how ferns are grouped as once-cut, twice-cut, thrice-cut (I’ve always loved that word: thrice), three parts, and unique. Another sketch, as you can see, illustrates the parts of the blade and defines the terms. I appreciate that at the bottom of page 9, Levine compares the terms she uses with those used by others, aka Leaflet/Pinna.

For those who are visual learners like me, on pages 11-17 are silhouettes for each group of ferns based on their cut type. That becomes valuable information for once you recognize the type of cut, you can simply go to the group pages devoted to it. For instance, Group 1 covers once-cut ferns on pages 18-27. All are denoted by a staggered black tab on the edge of the page, therefore making each group a quick find.

Group One begins with Christmas Fern. For each fern within a category, the reader will find a two-page description with illustrations. The description includes the Common Name, Scientific Name, Where it Grows, Tips for Identification, species it Can be Confused With, and Interesting Notes.

From these, I noted some different ways to consider the fern and picked up some new ID tips to share with others. I did find it funny that what I long ago learned was either Santa in his sleigh or the toe of a Christmas stocking, Levine refers to as an ear on the leaflet/pinna. 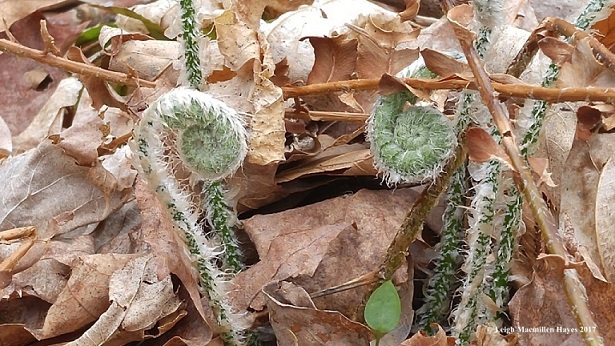 Right now, Christmas Fern fiddleheads have sprung forth in the center of the evergreen blades and they are mighty scaly.

Fiddlehead is the term used to describe the crozier shape (like a Bishop’s crozier) of an emerging frond. And not all fiddleheads are created edible. In fact, I know of only one that is. This is not the one. But do note those mighty hairy scales. 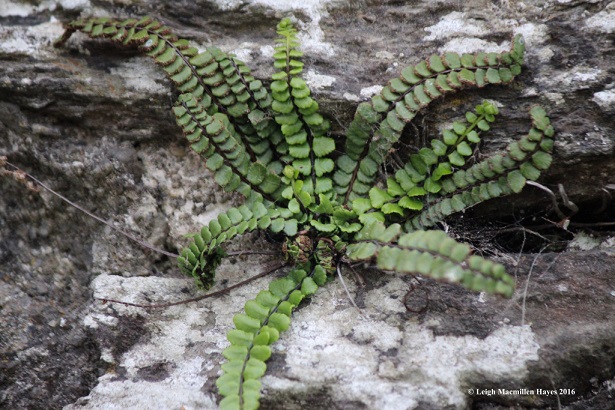 Another Group 1 species, Maidenhair Spleenwort. In her tips for ID, I love this line: “Leaflet pairs are opposite each other (like a bow tie).” This isn’t a species I typically encounter in western Maine. In fact, this photo was taken in the Glendalough monastic settlement founded by St. Kevin in the sixth century–in the Wicklow Mountains of Ireland. 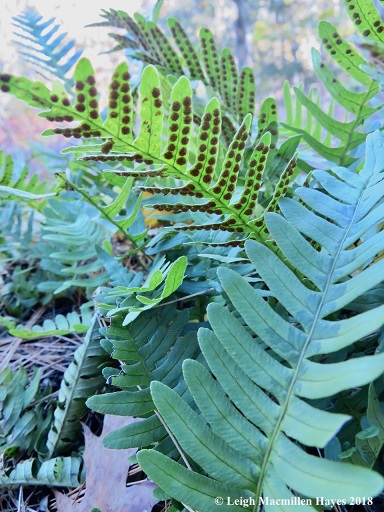 Under “Interesting Notes” for Rock Polypody, Levine clears up the meaning of the name for me, for though I knew that poly means “many” and pod refers to “foot,” I didn’t understand why the fern should be named thus. “Rock Polypody has many ‘feet’ connecting one fern to the next by their roots.” Now I can’t wait to revisit them. I chuckled when I read under her tips that Sensitive Ferns grow in large colonies. Indeed. 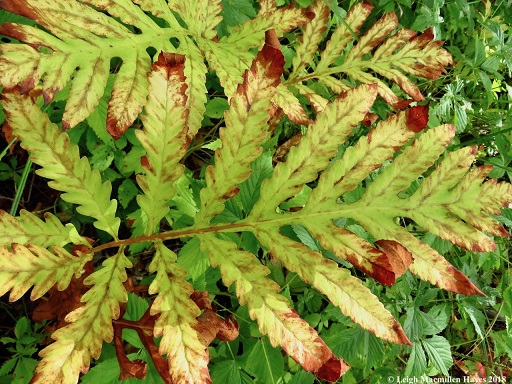 They are so named because with the slightest bit of cold they turn brown. Levine says it’s sensitive to the first frost, but I’ve noticed it turns brown in mid-August if not sooner, when the nights have that wonderful chill, but we haven’t yet had a frost. Group 2A are those ferns that are twice-cut and form a vase-like cluster. The first in the group, Cinnamon Fern, like all others, is slowly unfurling and if you head outdoors you might see the splendid display. Soon, the cinnamon-colored fertile stalks will be visible in the center of the plant formation. But, once they have done their duty and dried up for the season, you really have to look to locate the fertile frond. And Cinnamon Fern can be easily mistaken for Interrupted Fern. 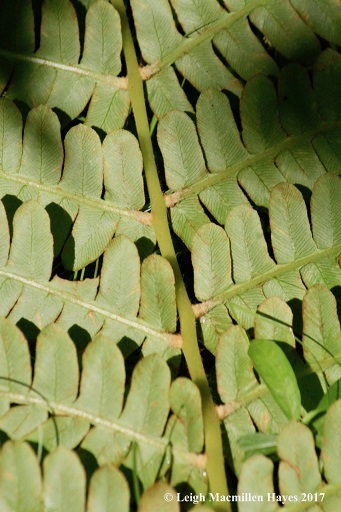 But as Levine reminds us, the give-away is on the back of the leaflet/pinna. By the center rachis, that main part of the frond to which all leaflet/pinna are attached, do you see the wooly tufts? In this neck of the woods, those only occur on the backside of Cinnamon Ferns.

Its cousin, Interrupted is best identified also by its fertile fronds, with the interruptions occurring in the middle of the blade. Levine sees them as butterflies when they first emerge and face upward. You’ll hear that pass through my lips going forth. 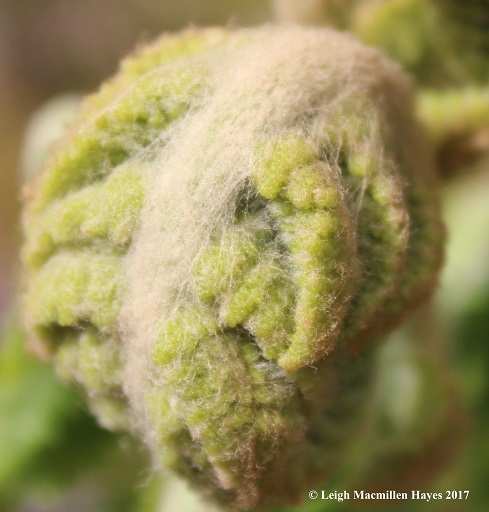 Here’s the thing with Cinnamon and Interrupted Ferns in their fiddlehead form. They are both covered in a veil of hair. But at least you know it’s one or the other and once they unfurl, the determination becomes easier. Levine’s tips for IDing Marginal Wood Fern included a note about the subleaflet/pinnule’s wavy appearance making us think it might be thrice-cut. She makes the point, however, that it belongs in Group 2 because they “are not cut deep enough.”

Do note the spores dotting the margin of the backside. 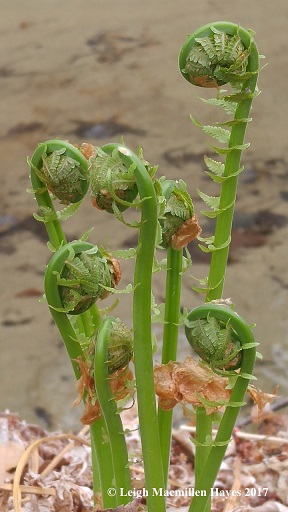 At last, she comes to Ostrich Fern. This is the one edible fiddlehead that I know of in our area. Notice how bright green it is? And the lack of scales? There’s another clue that you may or may not see in this photo, but it’s also important for ID if you plan to dine for the stalk is deeply grooved. Deeply. Always double-check. 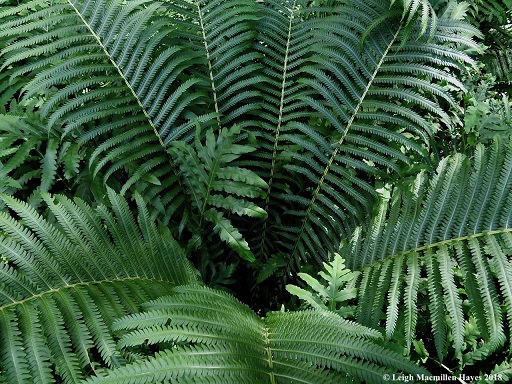 The vase-like form of Group 2A is especially evident in this display of Ostrich Fern, but there is an intruder. Can you name it? 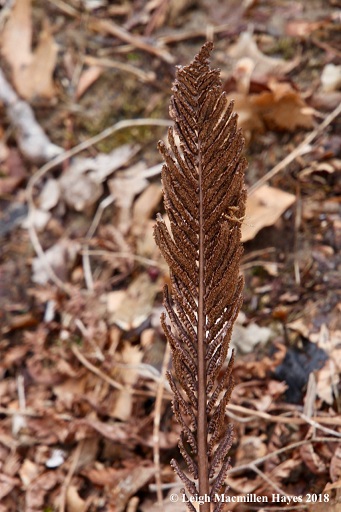 Like Levine states, the “fertile frond may remain standing during the winter.” I took this photo last spring. 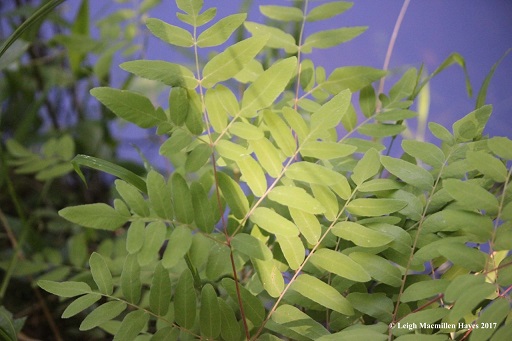 Group 2A ends with one of my favorites: Royal Fern. She describes it as having an “airy appearance.” I like that. And again, she uses that bow tie description. It’s the location of the spore cases that give this fern its name. Curiously, though she says the cluster appears at the tip, she doesn’t mention that they are like a crown on top of a head.

I did find it interesting to note in her “Interesting Notes” that “Roots are a source of fiber (osmundine) that is sometimes used as a growing medium for orchids.” Group 2B are those ferns that are twice-cut but do not grow in vase-like clusters. Such is the case for the Beech Fern, so named according to Levine because it is common where Beech trees grow. Another thing to pay attention to going forward.

All together, there are seven ferns described in this group. Lady Ferns are part of this group and their scaliness can be referred to as hairy legs. They also have spore cases on the underside of the leaflet/pinna that remind us of eyebrows.

What I liked about Levine’s description is the following: “Fronds grow in asymmetrical clusters, but it sometimes grows in small groups of just 2 or 3 fronds.” Group 4 consists of those ferns with a blade divided into three parts. The tallest among them is Bracken Fern. If you look closely, you may see a young friend of mine hiding under one.

With this species Levine issues a word of caution about the consumption of Bracken Fern fiddleheads: Don’t eat them. Buy her book and on page 62 you can read why. While the Bracken Fern grows 3 – 5 feet, most of the other members of Group 4 are rather diminutive in stature, such as the grape ferns. I do love that she notes how the sterile blades range from being finely cut to less finely cut. The illustration on page 65 helps clarify that. You’ll have to buy the book. 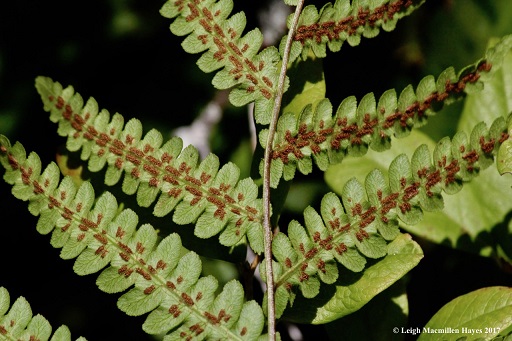 A species not included because it’s not all that common in the Northeast, at least in the woods, or rather associated wetlands I frequent, is the Virginia Chain Fern. It looks very similar to Cinnamon Fern, but . . . while Cinnamon has a separate fertile frond that forms in the spring and then withers, Chain Fern’s sporangia are oblong and on the underside. I’ve seen this at Lake Environmental Association’s Highland Research Forest and Holt Pond Preserve. That being said, you do have to get wet feet.

So, I hope I’ve convinced you to buy this book. It includes the twelve most common ferns of Maine: Christmas, Polypody, Sensitive, Cinnamon, Interrupted, Marginal, Royal, Beech, Hayscented, Lady, Evergreen, and Brachen, plus a variety of others, most of which we do stumble upon either often or less frequently depending upon habitat.

My favorite local bookstore, Bridgton Books, was not able to get a copy of the Book of May: Identifying Ferns the Easy Way, so I ordered via Amazon on Tuesday and it arrived today.

This post was reprinted with permission by Leigh Macmillen Hayes, writer and author of the blog wondermyway.com. The original post can be found here: https://wondermyway.com/2019/05/16/book-of-may-identifying-ferns-the-easy-way/