Amidst the historic homes, posh estates, and manicured lawns of southwestern Connecticut, a new, almost radical, movement is gaining strength. In a growing number of Fairfield County communities, lawns have been left to grow into meadows and tall, weedy-looking flowers abuzz with bees have replaced neat rows of annuals. The leaders of this initiative – dubbed Pollinator Pathway – are three women in their 60s from Wilton, Connecticut. I met Donna Merrill, Louise Washer, and Jackie Algon, members of the Pollinator Pathway Steering Committee, at a small park in Wilton. They pointed out the border between the pocket park and the gurgling Norwalk River where they and other volunteers had removed non-native invasive plants such as Japanese knotweed and Asian bittersweet and planted flood-tolerant natives under a few pre-existing sycamores. Silky willow, pussywillow, ostrich fern, Solomon’s seal, false indigo, goldenrod, and aster were planted to provide habitat for bees, butterflies, and other pollinators and to create a demonstration project. “It’s all about changing people’s aesthetic,” said Washer.

According to the U.S. Department of Agriculture, insects and other animals pollinate 75 percent of the world’s flowering plants, including 35 percent of food crops. Everyone is familiar with the work of honeybees and bumblebees in moving pollen from one flower to another as they forage for pollen and nectar, in the process fertilizing the plants. There are also hundreds of species of less familiar native bees (Connecticut has 349 species), including carpenter bees, sweat bees, mason bees, and digger bees, that are important pollinators. 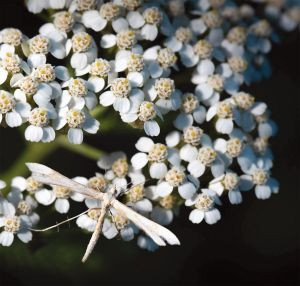 In addition, butterflies, moths, wasps, ants, and hummingbirds pollinate plants in our region. Unfortunately, there have been significant declines in populations of pollinators in recent decades. [Neonicotenoid] pesticides, which can travel into plant nectar and pollen, are highly toxic to bees and other pollinators. Other factors contributing to the decrease in bee populations are viruses, fungal infections, and other pathogens, which can cross over from honeybees to bumblebees. Butterfly decline has been linked to the disappearance of host plants for caterpillars due to the loss and fragmentation of habitat or changes in farming practices. Climate changes can lead to larval host plants being unavailable at critical times, and can disrupt the synchrony between pollinator activity and floral bloom time.

RESPONDING TO THE CHALLENGE

Donna Merrill had noticed the disappearance of bees and butterflies from her yard and wanted to do something locally to respond to these alarming trends. She had read about a project linking pollinator way stations and decided to try the idea. In 2017, she offered her neighbors between Ridgefield, Connecticut, and South Salem, New York, free native dogwood trees to create a corridor of pollinator habitat. The project was funded by the Hudson to Housatonic Regional Conservation Partnership, where Merrill was facilitator. After this successful pilot project, she convened the local land trust, conservation commission, garden club, nature center, and watershed association and proposed doing more to help pollinators in the Wilton area. Eighty people attended the first meeting, and interest has remained high. “The excitement has been phenomenal,” commented Merrill.

The group is working on a pesticide-free pathway along Route 33 between Ridgefield and Wilton that provides food and habitat for pollinators. Along this route, pollinator gardens have been planted at public spaces such as a library, cemetery, art museum, school, and a few churches. Containers were planted in front of the Ridgefield Town Hall and along Main Street. A meadow was created at a land trust property in the pollinator pathway. The Wilton Land Conservation Trust has recently raised more than $2 million, including a $700,000 state grant, to purchase a 13-acre field that was slated to be developed, said Merrill, who serves on the board of the land trust. Several private landowners along the corridor have become part of the effort and Pollinator Pathway’s goal is to get more to join. To this end, the group has held landowner forums to train residents how to encourage pollinators by putting in native plants and avoiding the use of pesticides. These neighborhood events “create amazing energy,” said Merrill, and teach citizens that “what they do in their own backyards makes a difference.”

Surrounding towns have been intrigued by this grassroots effort, and Washer and Mary Ellen Lemay from the Aspetuk Land Trust have gone on the road to spread the word. These initiatives are beginning to make a difference for pollinators in one corner of Connecticut and adjacent New York and are spreading. In Connecticut, they extend east almost to the Rhode Island border now, said Merrill, and in New York they are moving up the Hudson River Valley. To date, the conservation commissions in over 95 towns in southwestern Connecticut and adjacent New York State have joined Pollinator Pathway and are working on projects in their towns. A few of these are cities, such as Norwalk, Stamford, Bridgeport, and New Haven, Connecticut, and Yonkers, New York. 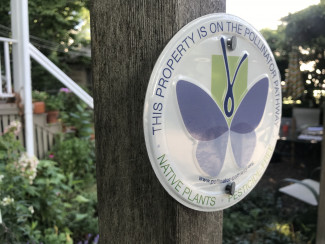 Pollinator Pathway has also helped groups in central Connecticut and Massachusetts start pollinator corridors in their towns. “They are using us as a stepping stone, but know their own communities,” said Algon. This movement has the potential to make a major contribution to boosting pollinator populations in our region. “With the global anxiety level so high, this is a very empowering thing to do,” said Washer. “It’s a good feeling to know that you can help in your own community.”

Pollinator Pathway subscribes to the teachings of Doug Tallamy, a professor of entomology and wildlife ecology at the University of Delaware, and has invited him to speak. Tallamy’s research has shown that native plants support pollinators and food webs far better than introduced ornamentals, because they evolved together. For example, native dogwood (Cornus florida), supports an entire food web and is host to the spring azure butterfly, while the Japanese dogwood hosts no North American butterfly.

Because 85 percent of the United States is privately owned, Tallamy says we need to redesign residential landscapes to support diverse pollinators and complex food webs, store carbon, and protect water quality. He advocates planting half the area now dedicated to lawn with diverse mixes of native woody and herbaceous plants.

“Bee lawns” are another idea. Research in Springfield, Massachusetts, found that when lawns are not treated with pesticides, and are mown every two weeks instead of weekly, they grow a diversity of small flowers such as dandelion and white clover that can provide nectar and pollen to bees. Sixty-five different species of flowering plants were counted in 17 lawns.

Creating a healthy Pollinator Pathway is not just about the pollinators. Bees, wasps, butterflies, moths, flies, and other insects that bring life to our meadows and gardens are also food for birds, amphibians, reptiles, mammals, and other creatures. Many pollinators rely on trees and woodland ground-cover as nesting, larval, and pupating habitat. Butterfly and moth caterpillars are a mainstay for numerous bird species throughout the Northeast, and are essential during the breeding season and while raising young.

Caterpillars are a nutritious meal, higher in proteins and fats than other insects, and the best source of carotenoids for birds. To successfully raise a single brood, chickadees bring to the nest anywhere from 6,000-9,000 caterpillars.

Author and entomologist Doug Tallamy has researched how species from a few genera of native trees, shrubs, and wildflowers contribute disproportionately to local food webs.

Trees are extremely valuable for pollinators because they provide a lot of food in a relatively small space, making foraging more efficient. Native oaks, willows, and birches are among the top woody producers of food for insects. Early-flowering willows and maples provide nectar and pollen when other sources are not available. Basswood, black cherry, tulip, chokecherry, dogwood, and fruit trees are other good choices.

In northern New England, trees in the maple and boxelder family such as sugar maple (Acer saccharum) serve as hosts to the caterpillars of as many as 280 butterfly and moth species.

Goldenrods, asters, and sun-flowers are at the top of the herbaceous plant list. While white oak boasts the highest number of caterpillar species in southern New England (more than 550 species), in northern regions sugar maple makes a fine substitute. 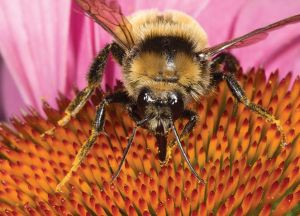 Pollinator Pathway offers a toolkit on their website (pollinator-pathway.org) with native plant lists, garden designs, pesticide alternatives, and other resources to help towns get started.

Watch Doug Tallamy’s highly engaging lecture at the North American Lake Management Society (NALMS) International Symposium on pollinator species, natural communities, and why native plant gardens should not be limited to just our back yards: https://www.youtube.com/watch?v=lrRJm-yLsQ8

Resource guide: Gardening with climate-smart native plants in the Northeast